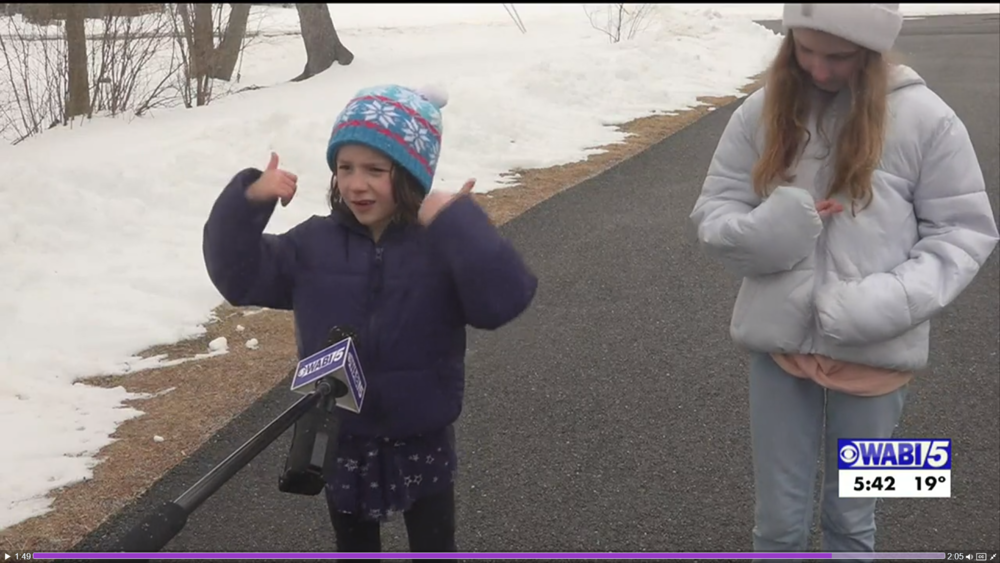 BANGOR, Maine (WABI) - Two little girls in Brewer are trying to make a difference in their community.

We spoke with these sisters and their parents about their separate missions to make things better.

Lucy and Maeve Küykendall are evidence that you are never too young to make a difference.

10-year-old Lucy is on a mission to recycle.

“Sea turtles and Pacific plastic, the plastic of the Pacific Ocean, she had read an article at school about it,” recalled the girls mother Kae Cooney.

“All this trash that people weren’t recycling and then it went into the ocean, and I didn’t like that because sea turtles were dying and sea turtles are my favorite animal,” said Lucy.

Meanwhile, 7-year-old Maeve is a running a fundraiser to help the homeless.

“Get them houses and food and family until they’re OK and they don’t get sick,” explained Maeve.

“She’s been very aware and conscious of the homeless population and worries that everyone is taken care of,” said their father Adam Küykendall .

When the recycling facility in Hampden closed last year, it halted Brewer’s program, so Lucy took matters into her own hands.

“She made a poster, and then she also wrote a letter to the politicians that started, Dear politicians,” said Kae.

The politicians listened to her plea . She got a coin from the Brewer City Council along with some letters - even one from Governor Mills that quoted Lucy saying their is no planet b.

“It was amazing,” said Lucy.

Maeve took to collecting change from friends and classmates.

“She’s always when she’s around people to bring up the topic of the homeless and ask if they want to make a donation of some sort,” said Adam.

So far, she has collected more than 200 dollars.

“I have no shame in saying that they’ve made me weepy several times with their kindness, their generosity, their thoughtfulness about the world and the people in it,” said Adam.

“She got to show her class, and it made them excited about recycling,” said Kae. “All these little bit of kindness they know that if they put it out in the world it comes back to them.”

Brewer City Officials told the family they are working to get the recycling program back and up running.

Until then Lucy would ask that we all do our parts.

If you would like to help Maeve in her efforts - the family would ask that you make a donation to the Bangor Homeless Shelter.